Sorry to have been so long, but we do not have the availability of internet everywhere. And when there is you can’t count on it. Beginning our journey from Vancouver we decided to take the Cassiar Highway towards Fairbanks and Anchorage rather than the usual trail beginning in Dawson Creek.  We were told this is a spectacular highway and so far it has proven to be true.  It has been one beautiful scene after another.Williams Lake Stampede Grounds was our first stop after Vancouver. They have an annual stampede there in June. Lennard was thinking he could get a job there in the cow chute. From there we went to Prince George and stayed at Mama Yeh Campgrounds outside town in the woods. That’s where we learned if you even dare to step outside without mosquito protection, you will be attacked in seconds. We have the ankle bites to prove.it. After a day of reorganizing and going to Walmart, and some Tim Horton coffee, we headed for Ksan RV Park in Hazelton, with spectacular views of the Kitwanga Mountains.

The next day we began our journey on the beautiful, spectacular Cassiar Highway 37 through the Cassiar Mountains to Alaska. We took the 37A cutoff towards Hyder, Alaska as an extra stop.

The drive was one of the most beautiful we have ever seen. Every turn was a new and breathtaking vista. We made a pit stop at Bear Glacier to take photos.

And… We saw a black bear on the highway. He just watched us drive by. As we neared the border, I got the passports out to cross the border and there was no border stop going into Hyder. What??? There was coming back into British Columbia.

Hyder is a town of 87 people with one general store, run by Wes who was super friendly, a post office, two bars, no police, no taxes and NO gas station. There also is no cell service for 280 miles. We parked at Camp Run-A-Muck for two days we liked it so much. The local 500 pound Grizzly Bear is called Food Stamp. Fortunately we did not meet him.

On the first night we had dinner at the “bus”, (an old school bus made into a restaurant) where Diana cooked fresh halibut her husband caught. It was delicious and we sat outside on school bus seats. It rained while we were having dinner which just added to the atmosphere under the awning. Diana and her husband married about 36 years ago after a whirlwind 17 day courtship. Then he brought her to Hyder!

After dinner we drove to the bear viewing station outside town on the Salmon River, but it was too early in the season for the running of the salmon.

The next day we took the beautiful, but terrifying (for me anyway) drive up the mountain to Salmon Glacier. I finally refused to go any further and the road was even worse after I got out of the car. Lennard got caught in fog at the top, and I was standing on the road waiting with Bella and Gypsy all alone thinking “Isn’t this bear country?” We got the boxing gloves out after that. So far that is probably the stupidest thing we have done. By the way, Salmon Glacier is the fifth largest glacier in British Columbia.

That evening Lennard got Hyderized at the local Glacier Bar. That means you drink a shot of 150 proof moonshine. If you can’t drink it, you buy everyone a drink. He made it of course. Dave, one of the locals, was sitting next to me and it was his birthday, so Lennard bought him a drink anyway! 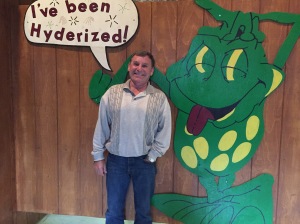 Later we met Sam and Ben and their friend George at out camp site. They are moving from Fairbanks to Arizona. Some local gentlemen and ladies showed up with guitars and a drum and we had a campfire jam-fest till almost midnight. Hyder is one of the most unusual places I have ever seen. Gorgeous scenery, local characters and NO traffic. Counting the people we met while there, bar tender, Diana and husband, Wes, Sullie (our RV host), David, and the young people at the campfire, we now know about 1/5th of the town. If you ever get the chance to go, don’t miss it. 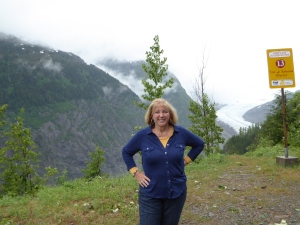