Okay, I admit it. Maybe I did schedule a little too far to drive. We drove from Spokane to Billings Montana in one day. About 508 miles. Stayed in Walmart parking lot again, but then who doesn’t? 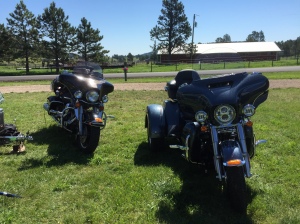 Our neighbors in the RV Park bikes. George and Debra and JR and Tina were the best.

The next day we arrived just outside Sturgis, South Dakota at the Rush No More RV Park. It is in a lovely setting in the woods. Our aim was to be near Mt. Rushmore, but we found out we had arrived the week before the 75th Annual Sturgis Motorcycle Rally. How lucky was that? Now we don’t know much about motorcycles, but we learned a lot there. That night there was a Jam session at the RV Park meeting room. About ten local musicians showed up to jam. Bluegrass was the basic theme. What a nice evening to end this marathon lap of the trip. 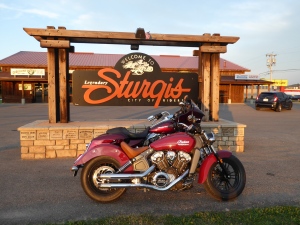 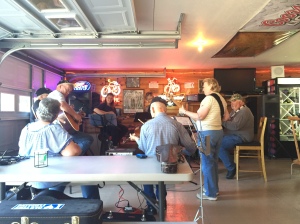 Sturgis is a town of about 6,080 people and this year, because it of the 75th anniversary, August 3rd – 9th, they are expecting over a million people. Over a million? Where are they going to put everyone? It seems every square foot of land and every hotel and every home and yard that could be rented out is… for miles around. We took a quick trip into Sturgis the next evening just to see what was going on. Tents for vendors were everywhere, lining the streets like a new city being erected out of nothing. We even saw a huge drone being used to scan the streets. I’m sure it was practice for the real deal the next week.

We met King and Red at the Knuckle Saloon, and they were helpful in guiding us in our plans for sightseeing the next day. 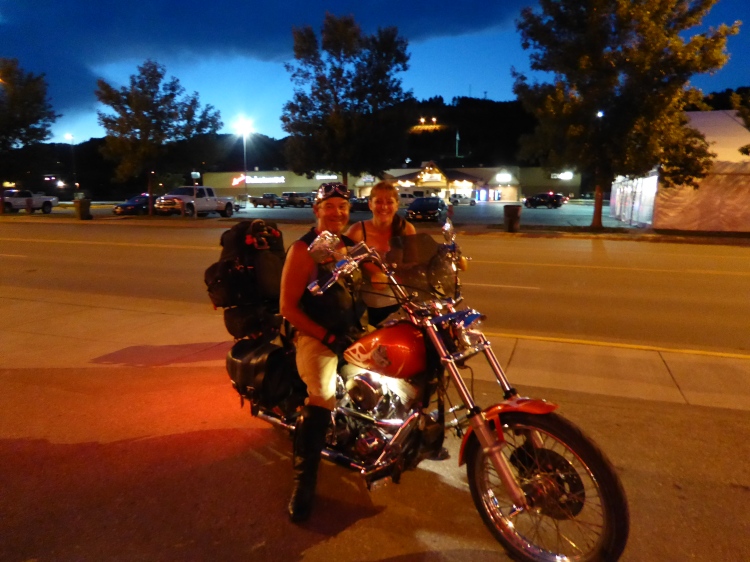 The scenery in this part of South Dakota is absolutely beautiful. There are rolling hills, mountains, pine trees, limestone cliffs and waterfalls at every turn. We took the road through Vanocker canyon to Mt Rushmore. 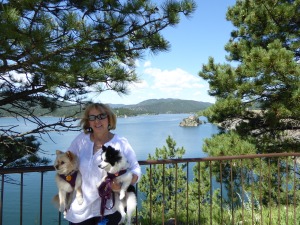 We stopped at the old mining town of Keystone along the way.

Mt. Rushmore is simply spectacular. There are no other words to aptly describe it. Sculpted by Gutzon Borglum between 1927 and 1941 it is a monument to his vision and dedication. He said:

“Let us place there, carved high, as close to heaven as we can, the words of our leaders, their faces, to show posterity what manner of men they were. Then breathe a prayer that these records will endure until the wind and rain alone shall wear them away.”

The four presidents depicted are:

George Washington, our first president and the Father of our country who said, “Government is not a reason; it is not eloquent; it is a force. Like fire, it is a dangerous servant and a fearful master.”

Thomas Jefferson, the author of the Declaration of Independence. He said, “A wise and frugal government, which shall leave men free to regulate their own pursuits of industry and improvement, and shall not take from the mouth of labor the bread it has earned – this is the sum of good government.”

Theodore Roosevelt who worked to ensure the rights of the common man. He said, “The things that will destroy America are prosperity at any price, peace at any price, safety instead of duty first, the love of soft living and the get rich quick theory of life.”

Abraham Lincoln, who held our nation together during the civil war who said, “America will never be destroyed from the outside. If we falter and lose our freedoms; it will be because we destroyed ourselves.”

Thinking about these great men and their words, I wish we had just one person in politics who holds these beliefs to be true and who could bring our nation back from the precipice I feel we are on. Just a bit of opinion!

There is no entrance fee, but it costs $11.00 to park. Dogs are not allowed at the memorial, so I waited at the entrance while Lennard went up and then vice versa. While we were there it began to rain and then hailed. It made the day even better as far as we were concerned. It was an inspiring morning. 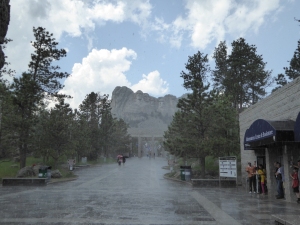 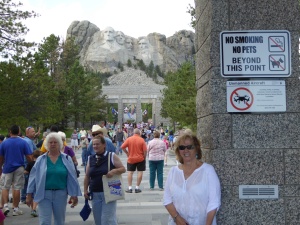 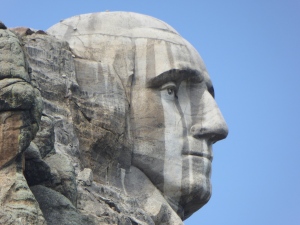 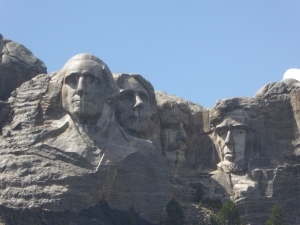 Next we traveled back north through Hill City and Lead to Spearfish Canyon. Stopping at Spearfish Falls, we hiked the short trail to the falls. Set among the trees, the falls cascade down creating a light mist across the small lake at the bottom. We had lunch at Chute Rooster, an old mining camp building. 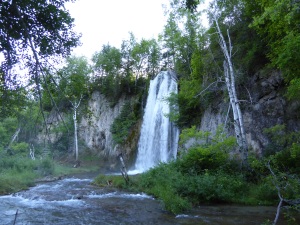 Early evening found us traveling through famous Deadwood with its casinos and on to Sturgis and then back to camp.

Our neighbors in the camp came for the rally. George and Debra brought their brand new Harley trike, and Tina and JR brought their Harley bike. These lovely people saw how tired we were and gave us dinner, prepared by George, the chef. We were floored by their kindness. Over the next two days we would see them in and out of camp and became friends. They of course, tried to talk Lennard into getting a Harley. I, of course am abstaining. We have enough toys at the moment.

On our last day we travelled into Sturgis again to see the famous Buffalo Chip Saloon and the Budweiser Clydesdale horses. Because it was the week prior to the event we were able to drive right in and see the horses up close and personal. Bella and Gypsy got held and did not utter a sound when they saw those great horses. As they were being groomed, the handler let us take photos of the horses, pet Chip the Dalmatian, and see the new Dalmatian puppy. He told us there were ten horses there of the more than 200 Clysdales they now have. 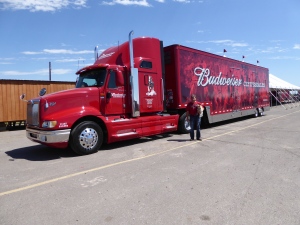 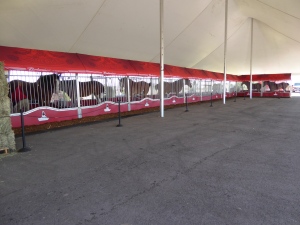 We also stopped at Full Throttle, the three story, largest bar in the world. As we talked to the staff preparing for the event next week, we were blown away by the scope and size of the plans. Police and EMT service are being brought in. Stages, bars, zip lines, and small cities for workers are being erected from the ground up. About fifteen famous bands will be playing including Lynard Skynryd, Dan Lawson Band, and Def Leppard. There will also be the first Mixed Martial Arts professionally sanctioned Caged Aggression event. Although the rally will be amazing, we were happy to have been there the week before! 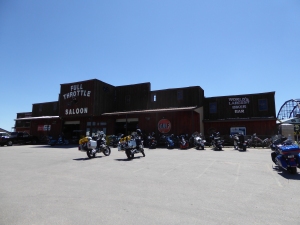