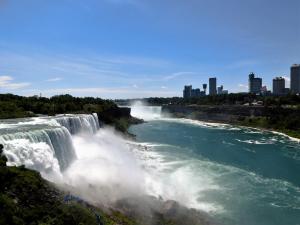 Arriving in Buffalo, we pulled into the KOA on Grand Island.  What a great camping spot with ponds, a lease-free dog park, and a little creek running through the camp.  After two days of regrouping, we took a short trip to downtown Buffalo to see the new Canalside Park.  It is a redevelopment area next to the Military Remembrance Park.  It was hot, but we managed to cool down with a few minutes sitting in the shade and a beer. The next day we took the RV in to get the back air conditioner repaired.  While it was being worked on we went to Lewistown. 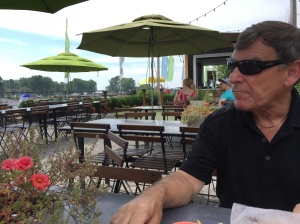 Lewiston is a historical village and the site of the first European settlement in Western New York.  It was also the site from which the US invaded Canada in the first major battle of the War of 1812.  It sits just across the Niagara River from Canada.  We spoke to the Harbor Master there, who told us they have a couple of people a week try to cross over to the US from Canada every week.  You could almost throw a rock across the river it is so close. In fact, it is also an area where slaves were ferried over to Canada so they could be free.  A lot of history for a small town. 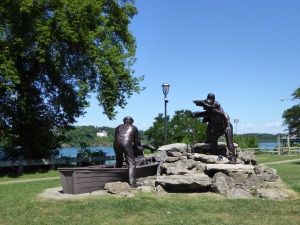 Pointing the way to freedom 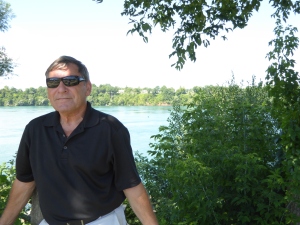 We retrieved the RV and got ready to meet our good friends, Jim and Joanne, at their hotel for dinner at the Left Bank restaurant downtown Buffalo.  The next morning my cousins, Darlene and Rick, from Scarborough, Ontario, Canada joined us at the KOA. Jim and Joanne joined all of us for a sightseeing tour of the American side of the Falls, led by Rick, who seems to know every road in the nation!  We also saw the Whirlpool where the river has currents that can take you 150 feet under in a second.  That night we had a BBQ at our RV in perfect weather. 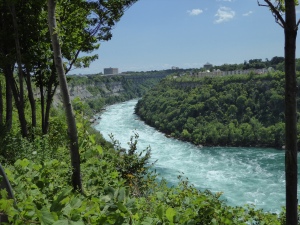 The next day Rick took us to the Canadian side of Niagara, where we saw the US and Canadian falls, and the view is much more magnificent.  Then we drove to Niagara On The Lake for lunch.  This quaint, British style, town has so many beautiful flowers on the streets and near the stores and restaurants, you would think you were in a magnificent garden.  There were horse and carriages on the streets and old buildings with ornate facades from another century.  It was just beautiful. 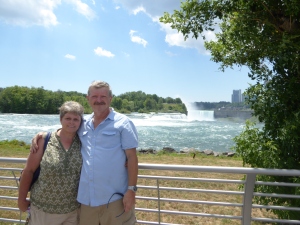 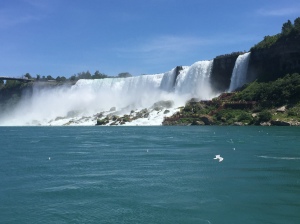 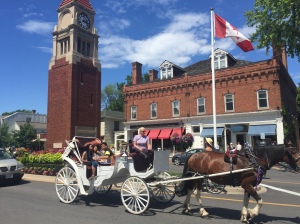 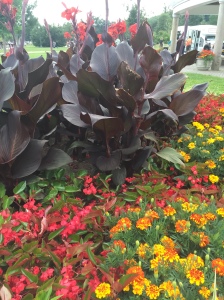 That night we went to the Anchor Bar for Buffalo Wings.  This restaurant was started by a family and still is owned by the same family.  One night the kids came in late with some friends and wanted something to eat.  Mom had some leftover wings so she fried them up, added some spicy sauce and Voila, Buffalo Wings were born. 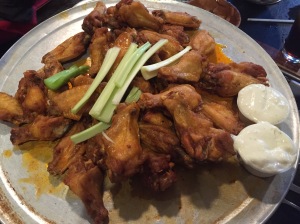 Sunday we took the morning Bedore tour of the American Falls.  Our first stop was back at the whirlpool and then we went to the Cave of the Winds.  What an experience.  You wear a poncho and traverse stairs until you are right next to the falls with the water cascading down and the wind carrying the water over you until you are drenched.  It was hilarious and so much fun!  We then went on the Maid of the Mist boat that takes you right next to the falls.  We of course wore the fashionable ponchos again to keep us sort of dry. It was very exciting as the falls thundered down above us.  You can’t imagine the power of the water and the thunderous noise unless you actually experience it.

We were sorry to see Rick and Darlene leave that afternoon. That evening we took the tour to the Canadian side and went on the Journey Behind the Falls.  You take an elevator down about 150 feet and traverse a tunnel under the falls until you can see out a cave to the falls from the inside.  You can also go to a viewing station to get up close to the falls again.  Not quite as exciting as the morning, but great too. Then we drove to the Flower Clock and the Canadian Hydroelectric power station.  The hydroelectric power dam is not a large as Hoover Dam, but generates more electricity. 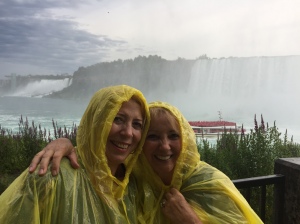 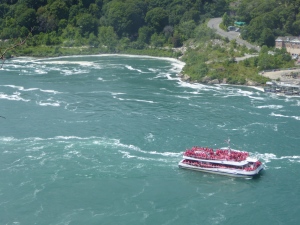 After dark we went up the Skylon Tower to view the falls with the lights on them, and then to a parking spot to see the fireworks over the falls.  Both were exquisite. 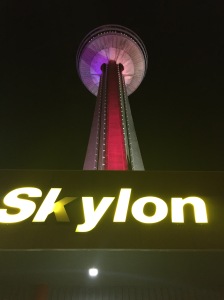 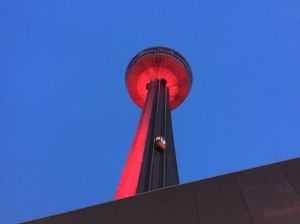 The next day we had lunch with Jim and Joanne before they left for Las Vegas.  Now we are getting ready to travel to Maine over the next couple of days. We are looking forward to visiting Bar Harbor before we travel down to Portland to meet up with Scott and Donna, who are making their way across country right now.  Stay tuned!