The crack of thunder woke me up at 2:30 AM, rolling across the Pamlico Sound on the Outer Banks of North Carolina, growling, rumbling and sizzling.  With thoughts of hurricanes and nor’easters entering our head, along with the high humidity, we decided to leave the Outer Banks of North Carolina a day early and head for the high ground of Skyline Drive and the Blue Ridge Parkway. 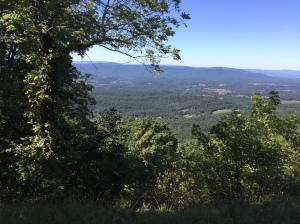 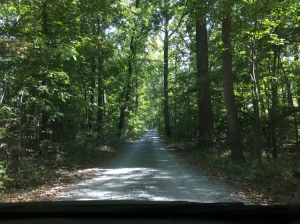 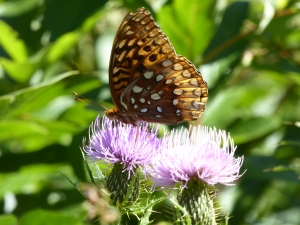 The Blue Ridge Parkway is a magnificent road 469 miles long running through Virginia and North Carolina.  We were able to drive 400 miles of it from Rockfish Gap, VA to Ashville, NC.  The last portion of it contains tunnels that are too low for our RV to get through.

We stayed in Waynesboro, VA the first two nights, which allowed us to take the tow car over the Skyline Drive in the Shenandoah Valley the first day.  This drive travels through Shenandoah National Park for 109 miles.  It is a concert in forest and mountains, giving those who traverse it a beautiful drive through the length of the park.  Driving back we took Highway 11 through small historical towns where civil war battles were fought.  We did make one stop at an Urgent Care, as Lennard had gotten stung the night before and his arm was alarmingly warm, red and swollen by the afternoon from wrist to elbow.  The Lovely Physician’s Assistant took good care of him and started him on antibiotics in case it was becoming infected.  I won’t post a photo…too ugly.

The second day we began our journey along the Blue Ridge Parkway.  We were awestruck by the beauty and variety of scenery along the way.  There were forests, views of Blue Mountains across valleys, rocks and flowers, along with the beginning of the changing of the leaves for fall.  We would miss the brilliant fall colors, but there were few vehicles of any type on the road, so that was a plus.  That night we stopped in Lynchburg KOA and took the evening to see Popular Forrest, Thomas Jefferson’s retreat, built in 1806.  It was the first octagonal home built in America and designed by him.  In the evening we hiked to the Natural Bridge, a huge bridge carved out of limestone.  At nightfall we were lucky to see the stunning light and music show at the bridge.

The third day, while traveling to Fancy Gap  we stopped at an overlook to find about fifteen hawk watchers counting the hawks migrating through the area to the south.  We also found a crossing of the Appalachian Trail and took the time to hike a mile on it. Further down the road, we stopped at a National Park living display of early life at Mabry Mill.

Independence was only about 45 minutes from Fancy Gap, where we were camping for the evening, so we took the time to attend a Bluegrass Music jam in a historical 1908 Courthouse there.  They played “Old Time” music which is the music of Southern Appalachians, handed down from generation to generation. There were about 10 musicians there playing, fiddles, banjos, a dulcimer, and a bass fiddle. The next day was mostly traveled over the plateau portion of the Parkway.  Each day we took at least a one to two mile hike. 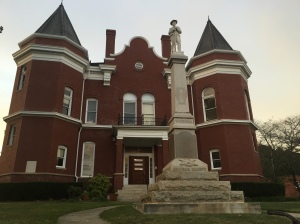 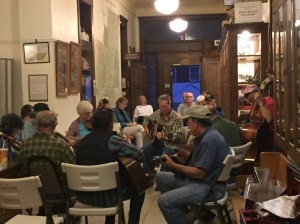 Our last day on the parkway was just as beautiful, but much more challenging, as the road over the highest point was comprised of twists and turns on a narrow road with branches hanging over the road so low they hit the top and sides of the RV.  We saved the day with a two mile hike to beautiful Linville Falls and ending up at a street festival in Ashville that night.  And… to finish off the night we ate dinner at Bouchon, a lovely French Bistro, sitting in the evening light on their patio.  One of the few nights in the last few weeks we had eaten out.  We needed a break after the day’s drive.

We had one more day in Ashville before we headed to Sevierville, Tennessee for the Tiffin Ralley.  (Our RV’s manufacturer ralley.) We would take that day to spend at the Vanderbilt’s Biltmore Estate.  The dogs got taken to a doggie daycare and we were off for the day.  It was so spectacular, I had to put it in a separate post!

5 thoughts on “WE SURVIVED THE BLUE RIDGE PARKWAY !”