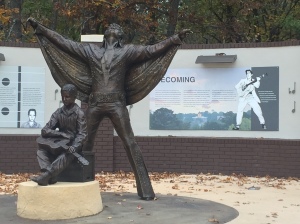 Elvis was born in Tupelo Mississippi on January 8th 1935 in a two room house his father, uncle and grandfather built. He lived there until he was 13 years old, when his family moved to Memphis. Tupelo did a fabulous job of designing a monument to his birthplace and child hood.  You can see memorabilia in the museum, visit the house he was born in and even sit in the church where he first heard gospel singing.  There is a bigger than life-size statue of Elvis as an adult and in front of that, a statue of him as a child. Tupelo is also home to the hardware store where his mother, Gladys bought him his first guitar for his tenth birthday.

You can really get a feel for how poor his family was when you visit Graceland after seeing his childhood home. The comparison is incredible.  Elvis really was a rags to riches story and he never forgot that as evidenced by his generosity to his family, friends and many charities.

We were finally finished with our repairs in Red Bay and took off for home, grateful for all the hard work the mechanics in Red Bay did for us.  We decided to stop in Memphis to see Graceland.  Why not? We were going through anyway. That night we ate dinner at Marlowe’s, which is a famous BBQ and Rib place near Graceland.  Apparently, Elvis ate there and they have a lot of Elvis memorabilia. And…they even have a pink Cadillac, which will pick you up from either the Graceland RV Park or Heartbreak Hotel, both on Graceland grounds. By the way, the food was bad for you, but delicious. 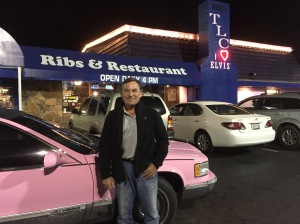 Graceland was beautiful and the I-pad tour was extremely informative and easy to use.  It not only took you on a self-guided tour of the mansion, but gave you details about Elvis, his family, friends, the art and furnishings. Most of what you see is original, just the way he left it.  We also saw archives of photographs, his automobile collection, his costumes and his two planes.  His favorite was the Lisa Marie, named after his daughter. The tour took about three and a half hors and was well worth the admission price. 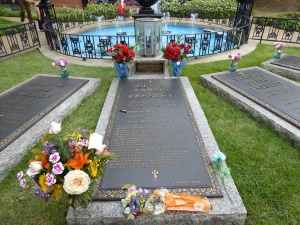 The next day we headed out on the long trek across the country, doing about 400 miles per day.  That’s a lot in an RV.  We did stop to get some minor repairs and one day we ended up in a traffic jam for over two hours, adding to our day as road warriors.  We even parked in a Walmart parking lot in Amarillo, Texas because we were so late getting that far.  When we got to Grants, New Mexico, the temperature the next morning was 15 degrees.  Wow! From 80 in Florida to 15 in New Mexico.

Our last stop was a short detour to the North Ranch Escapee RV Park to see our friends from Homer, Tom and Linda and their new dog Swiffer.  Swiffer was sooo darling and loved Gypsy playing with her.  Bella just sat and watched. Tom and Linda took us to dinner at Nichols, a small restaurant in the middle of nowhere, run by a Brit of all things.  The food was absolutely delicious, so we took them to breakfast there the next morning, before leaving great friends.

We finally arrived home on Sunday, November 15, 2015, six months and five days, and 16,860 miles after we left.  We were happy to be home. During the entire trip we didn’t think much about our house, but did miss our family and friends.  I think we will be home for a while!

4 thoughts on “ELVIS IS IN THE HOUSE”